Grab your Crowns and Sashes YOU are going on Tour

This is a poppin Challenge with a couple of choices. National Popcorn day is this week so we want our queens in crown and sash, dress stylish and look like a queen... to do one or all of the challenges listed:

1. Make a popcorn snack like you are doing a cooking show. Explain all the steps and talk about the history.

3. Find a Gourmet Popcorn shop and talk to the employees about popcorn share pics and video of your Tour.

Due Sunday the 22nd March 3pm send as you do this though.

Do all three for a Community Service Certificate.

Popcorn Dates Back Thousands of Years

Biblical accounts of "corn" stored in the pyramids of Egypt are misunderstood. ... It is believed that the first use of wild and early cultivated corn was popping. The oldest ears of popcorn ever found were discovered in the Bat Cave of west central New Mexico in 1948 and 1950.

Corn was domesticated about 10,000 years ago in what is now Mexico Archaeologists discovered that people have known about popcorn for thousands of years. In Mexico, for example, remnants of popcorn have been found that date circa 3600 BC.

Through the 19th century, popping of the kernels was achieved by hand on stove tops. Kernels were sold on the East Coast of the United States under names such as Pearls or Nonpareil. The term popped corn first appeared in John Russell Bartlett's 1848 Dictionary of Americanisms. Popcorn is an ingredient in Cracker Jack and, in the early years of the product, it was popped by hand.

An early popcorn machine in a street cart, invented in the 1880s by Charles Cretors in Chicago.

During the Great Depression, popcorn was fairly inexpensive at 5–10 cents a bag and became popular. Thus, while other businesses failed, the popcorn business thrived and became a source of income for many struggling farmers, including the Redenbacher family, namesake of the famous popcorn brand. During World War II, sugar rations diminished candy production, and Americans compensated by eating three times as much popcorn as they had before. The snack was popular at theaters, much to the initial displeasure of many of the theater owners, who thought it distracted from the films. Their minds eventually changed, however, and in 1938 a Midwestern theater owner named Glen W. Dickinson Sr. installed popcorn machines in the lobbies of his Dickinson theaters. Popcorn was making more profit than theater tickets, and at the suggestion of his production consultant, R. Ray Aden, Dickinson purchased popcorn farms and was able to keep ticket prices down. The venture was a financial success, and the trend to serve popcorn soon spread. 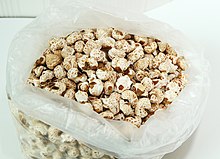 In 1970, Orville Redenbacher's namesake brand of popcorn was launched. In 1981, General Mills received the first patent for a microwave popcorn bag; popcorn consumption saw a sharp increase, by tens of thousands of pounds, in the years following.

At least six localities (all in the Midwestern United States) claim to be the "Popcorn Capital of the World;": Ridgway, Illinois; Valparaiso, Indiana; Van Buren, Indiana; Schaller, Iowa; Marion, Ohio; and North Loup, Nebraska. According to the USDA, corn used for popcorn production is specifically planted for this purpose; most is grown in Nebraska and Indiana, with increasing area in Texas. As the result of an elementary school project, popcorn became the official state snack food of Illinois.

Grab your Crowns and Sashes YOU are going on Tour!